Steps to Christ, Chapter 1
God's Love for You

Nature and revelation alike testify of God's love. Our Father in heaven is the source of life, of wisdom, and of joy. Look at the wonderful and beautiful things of nature. Think of their marvelous adaptation to the needs and happiness, not only of man, but of all living creatures. The sunshine and the rain, that gladden and refresh the earth, the hills and seas and plains, all speak to us of the Creator's love. It is God who supplies the daily needs of all His creatures. In the beautiful words of the psalmist--

"The eyes of all wait upon Thee; And Thou givest them their meat in due season.  Thou openest Thine hand, And satisfiest the desire of every living thing."  Psalm 145:15,16

God made man perfectly holy and happy; and the fair earth, as it came from the Creator's hand, bore no blight of decay or shadow of the curse. It is transgression of God's law--the law of love--that has brought woe and death. Yet even amid the suffering that results from sin, God's love is revealed. It is written that God cursed the ground for man's sake. Genesis 3:17. The thorn and the thistle--the difficulties and trials that make your life one of toil and care--were appointed for his good as a part of the training needful in God's plan for his uplifting from the ruin and degradation that sin has wrought. The world, though fallen, is not all sorrow and misery. In nature itself are messages of hope and comfort. There are flowers upon the thistles, and the thorns are covered with roses.

"God is love" is written upon every opening bud, upon every spire of springing grass. The lovely birds making the air vocal with their happy songs, the delicately tinted flowers in their perfection perfuming the air, the lofty trees of the forest with their rich foliage of living green -- all testify to the tender, fatherly care of our God and to His desire to make His children happy.

The word of God reveals His character. He Himself has declared His infinite love and pity. When Moses prayed, "Show me Thy glory," the Lord answered, "I will make all My goodness pass before thee." Exodus 33:18, 19. This is His glory. The Lord passed before Moses, and proclaimed, "The Lord, The Lord God, merciful and gracious, long-suffering, and abundant in goodness and truth, keeping mercy for thousands, forgiving iniquity and transgression and sin." Exodus 34:6, 7. He is "slow to anger, and of great kindness," "because He delighteth in mercy." Jonah 4:2; Micah 7:18.

God has bound our hearts to Him by unnumbered tokens in heaven and in earth.  Through the things of nature, and the deepest and tenderest earthly ties that human hearts can know, He has sought to reveal Himself to us. Yet these but imperfectly represent His love. Though all these evidences have been given, the enemy of good blinded the minds of men, so that they looked upon God with fear; they thought of Him as severe and unforgiving. Satan led men to conceive of God as a being whose chief attribute is stern justice,-- one who is a severe judge, a harsh, exacting creditor. He pictured the Creator as a being who is watching with jealous eye to discern the errors and mistakes of men, that He may visit judgments upon them. It was to remove this dark shadow, by revealing to the world the infinite love of God, that Jesus came to live among men.

The Son of God came from heaven to make manifest the Father. "No man hath seen God at any time; the only begotten Son, which is in the bosom of the Father, He hath declared Him." John 1:18. "Neither knoweth any man the Father, save the Son, and he to whomsoever the Son will reveal Him." Matthew 11:27. When one of the disciples made the request, "Show us the Father," Jesus answered, "Have I been so long time with you, and yet hast thou not known Me, Philip? He that hath seen Me hath seen the Father; and how sayest thou then, Show us the Father?" John 14:8, 9.

In describing His earthly mission, Jesus said, The Lord "hath anointed Me to preach the gospel to the poor; He hath sent Me to heal the brokenhearted, to preach deliverance to the captives, and recovering of sight to the blind, to set at liberty them that are bruised." Luke 4:18. This was His work. He went about doing good and healing all that were oppressed by Satan. There were whole villages where there was not a moan of sickness in any house, for He had passed through them and healed all their sick. His work gave evidence of His divine anointing. Love, mercy, and compassion were revealed in every act of  His life; His heart went out in tender sympathy to the children of men. He took man's nature, that He might reach man's wants. The poorest and humblest were not afraid to approach Him. Even little children were attracted to Him. They loved to climb upon His knees and gaze into the pensive face, benignant with love.

​Jesus did not suppress one word of truth, but He uttered it always in love. He exercised the greatest tact and thoughtful, kind attention in His intercourse with the people. He was never rude, never needlessly spoke a severe word, never gave needless pain to a sensitive soul. He did not censure human weakness. He spoke the truth, but always in love. He denounced hypocrisy, unbelief, and iniquity; but tears were in His voice as He uttered His scathing rebukes. He wept over Jerusalem, the city He loved, which refused to receive Him, the way, the truth, and the life. They had rejected Him, the Saviour, but He regarded them with pitying tenderness. His life was one of self-denial and thoughtful care for others. Every soul was precious in His eyes. While He ever bore Himself with divine dignity, He bowed with the tenderest regard to every member of the family of God. In all men He saw fallen souls whom it was His mission to save.

It was to redeem us that Jesus lived and suffered and died. He became "a Man of Sorrows," that we might be made partakers of everlasting joy. God permitted His beloved Son, full of grace and truth, to come from a world of indescribable glory, to a world marred and blighted with sin, darkened with the shadow of death and the curse.   He permitted Him to leave the bosom of His love, the adoration of the angels, to suffer shame, insult, humiliation, hatred, and death. "The chastisement of our peace was upon Him; and with His stripes we are healed." Isaiah 53:5. Behold Him in the wilderness, in Gethsemane, upon the cross! The spotless Son of God took upon Himself the burden of sin. He who had been one with God, felt in His soul the awful separation that sin makes between God and man. This wrung from His lips the anguished cry, "My God, My God, why hast Thou forsaken Me?" Matthew 27:46. It was the burden of sin, the sense of its terrible enormity, of its separation of the soul from God--it was this that broke the heart of the Son of God.

But this great sacrifice was not made in order to create in the Father's heart a love for man, not to make Him willing to save. No, no! "God so loved the world, that He gave His only-begotten Son." John 3:16. The Father loves us, not because of the great propitiation, but He provided the propitiation because He loves us. Christ was the medium through which He could pour out His infinite love upon a fallen world. "God was in Christ, reconciling the world unto Himself." 2 Corinthians 5:19. God suffered with His Son. In the agony of Gethsemane, the death of  Calvary, the heart of Infinite Love paid the price of our redemption.

Jesus said, "Therefore doth My Father love Me, because I lay down My life, that I might take it again." John 10:17. That is, "My Father has so loved you that He even loves Me more for giving My life to redeem you. In becoming your Substitute and Surety, by surrendering My life, by taking your liabilities, your transgressions, I am endeared to My Father; for by My sacrifice, God can be just, and yet the Justifier of him who believeth in Jesus."

None but the Son of God could accomplish our redemption; for only He who was in the bosom of the Father could declare Him. Only He who knew the height and depth of the love of God could make it manifest. Nothing less than the infinite sacrifice made by Christ in behalf of fallen man could express the Father's love to lost humanity.

​"God so loved the world, that He gave His only-begotten Son." He gave Him not only to live among men, to bear their sins, and die their sacrifice. He gave Him to the fallen race. Christ was to identify Himself with the interests and needs of humanity. He who was one with God has linked Himself with the children of men by ties that are never to be broken.  Jesus is "not ashamed to call them brethren" (Hebrews 2:11); He is our Sacrifice, our Advocate, our Brother, bearing our human form before the Father's throne, and through eternal ages one with the race He has redeemed--the Son of man.  And all this that man might be uplifted from the ruin and degradation of sin that he might reflect the love of God and share the joy of holiness.

The price paid for our redemption, the infinite sacrifice of our heavenly Father in giving His Son to die for us, should give us exalted conceptions of what we may become through Christ. As the inspired apostle John beheld the height, the depth, the breadth of the Father's love toward the perishing race, he was filled with adoration and reverence; and, failing to find suitable language in which to express the greatness and tenderness of this love, he called upon the world to behold it. "Behold, what manner of love the Father hath bestowed upon us, that we should be called the sons of God." 1 John 3:1. What a value this places upon man! Through transgression the sons of man become subjects of Satan. Through faith in the atoning sacrifice of Christ the sons of Adam may become the sons of God. By assuming human nature, Christ elevates humanity. Fallen men are placed where, through connection with Christ, they may indeed become worthy of the name "sons of God."

Such love is without a parallel. Children of the heavenly King! Precious promise!  Theme for the most profound meditation! The matchless love of God for a world that did not love Him! The thought has a subduing power upon the soul and brings the mind into captivity to the will of God. The more we study the divine character in the light of the cross, the more we see mercy, tenderness, and forgiveness blended with equity and justice, and the more clearly we discern innumerable evidences of a love that is infinite and a tender pity surpassing a mother's yearning sympathy for her wayward child. 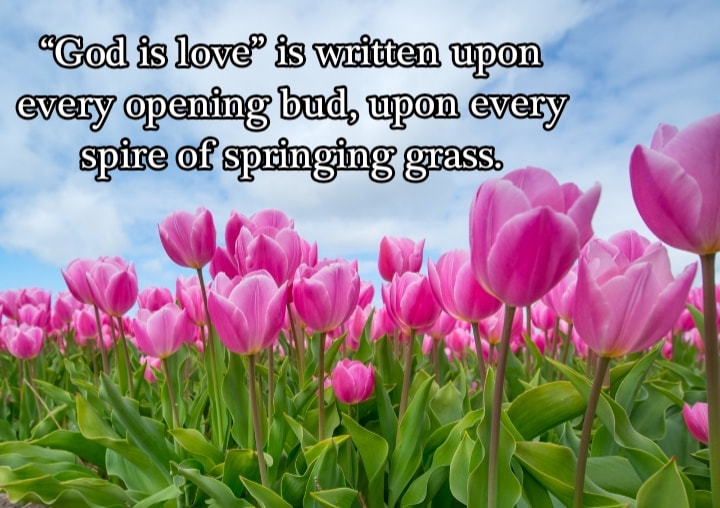