Steps to Christ, Chapter 2
Your Need of Christ

​     Man was originally endowed with noble powers and a well-balanced mind. He was perfect in his being, and in harmony with God. His thoughts were pure, his aims holy. But through disobedience, his powers were perverted, and selfishness took the place of love. His nature became so weakened through transgression that it was impossible for him, in his own strength, to resist the power of evil. He was made captive by Satan, and would have remained so forever had not God specially interposed. It was the tempter's purpose to thwart the divine plan in man's creation, and fill the earth with woe and desolation. And he would point to all this evil as the result of God's work in creating man.

In his sinless state, man held joyful communion with Him "in whom are hid all the treasures of wisdom and knowledge." Colossians 2:3. But after his sin, he could no longer find joy in holiness, and he sought to hide from the presence of God. Such is still the condition of the unrenewed heart. It is not in harmony with God, and finds no joy in communion with Him. The sinner could not be happy in God's presence; he would shrink from the companionship of holy beings. Could he be permitted to enter heaven, it would have no joy for him. The spirit of unselfish love that reigns there —every heart responding to the heart of Infinite Love —would touch no answering chord in his soul. His thoughts, his interests, his motives, would be alien to those that actuate the sinless dwellers there. He would be a discordant note in the melody of heaven. Heaven would be to him a place of torture; he would long to be hidden from Him who is its light, and the center of its joy. It is no arbitrary decree on the part of God that excludes the wicked from heaven; they are shut out by their own unfitness for its companionship. The glory of God would be to them a consuming fire. They would welcome destruction, that they might be hidden from the face of Him who died to redeem them.

It is impossible for us, of ourselves, to escape from the pit of sin in which we are sunken. Our hearts are evil, and we cannot change them. "Who can bring a clean thing out of an unclean? not one." "The carnal mind is enmity against God: for it is not subject to the law of God, neither indeed can be." Job 14:4; Romans 8:7. Education, culture, the exercise of the will, human effort, all have their proper sphere, but here they are powerless. They may produce an outward correctness of behavior, but they cannot change the heart; they cannot purify the springs of life. There must be a power working from within, a new life from above, before men can be changed from sin to holiness. That power is Christ. His grace alone can quicken the lifeless faculties of the soul, and attract it to God, to holiness.

The Saviour said, "Except a man be born from above," unless he shall receive a new heart, new desires, purposes, and motives, leading to a new life, "he cannot see the kingdom of God." John 3:3. The idea that it is necessary only to develop the good that exists in man by nature, is a fatal deception. "The natural man receiveth not the things of the Spirit of God: for they are foolishness unto him: neither can he know them, because they are spiritually discerned." "Marvel not that I said unto thee, Ye must be born again." 1 Corinthians 2:14; John 3:7. Of Christ it is written, "In Him was life; and the life was the light of men"—the only "name under heaven given among men, whereby we must be saved." John 1:4; Acts 4:12.

It is not enough to perceive the loving-kindness of God, to see the benevolence, the fatherly tenderness, of His character. It is not enough to discern the wisdom and justice of His law, to see that it is founded upon the eternal principle of love. Paul the apostle saw all this when he exclaimed, "I consent unto the law that it is good." "The law is holy, and the commandment holy, and just, and good." But he added, in the bitterness of his soul-anguish and despair, "I am carnal, sold under sin." Romans 7:16, 12, 14. He longed for the purity, the righteousness, to which in himself he was powerless to attain, and cried out, "O wretched man that I am! who shall deliver me from this body of death?" Romans 7:24. Such is the cry that has gone up from burdened hearts in all lands and in all ages. To all, there is but one answer, "Behold the Lamb of God, which taketh away the sin of the world." John 1:29.

Many are the figures by which the Spirit of God has sought to illustrate this truth, and make it plain to souls that long to be freed from the burden of guilt. When, after his sin in deceiving Esau, Jacob fled from his father's home, he was weighed down with a sense of guilt. Lonely and outcast as he was, separated from all that had made life dear, the one thought that above all others pressed upon his soul, was the fear that his sin had cut him off from God, that he was forsaken of Heaven. In sadness he lay down to rest on the bare earth, around him only the lonely hills, and above, the heavens bright with stars. As he slept, a strange light broke upon his vision; and lo, from the plain on which he lay, vast shadowy stairs seemed to lead upward to the very gates of heaven, and upon them angels of God were passing up and down; while from the glory above, the divine voice was heard in a message of comfort and hope. Thus was made known to Jacob that which met the need and longing of his soul—a Saviour. With joy and gratitude he saw revealed a way by which he, a sinner, could be restored to communion with God. The mystic ladder of his dream represented Jesus, the only medium of communication between God and man.

This is the same figure to which Christ referred in His conversation with Nathanael, when He said, "Ye shall see heaven open, and the angels of God ascending and descending upon the Son of man." John 1:51. In the apostasy, man alienated himself from God; earth was cut off from heaven. Across the gulf that lay between, there could be no communion. But through Christ, earth is again linked with heaven. With His own merits, Christ has bridged the gulf which sin had made, so that the ministering angels can hold communion with man. Christ connects fallen man in his weakness and helplessness with the Source of infinite power.

But in vain are men's dreams of progress, in vain all efforts for the uplifting of humanity, if they neglect the one Source of hope and help for the fallen race. "Every good gift and every perfect gift" (James 1:17) is from God. There is no true excellence of character apart from Him. And the only way to God is Christ. He says, "I am the way, the truth, and the life: no man cometh unto the Father, but by Me." John 14:6.

The heart of God yearns over His earthly children with a love stronger than death. In giving up His Son, He has poured out to us all heaven in one gift. The Saviour's life and death and intercession, the ministry of angels, the pleading of the Spirit, the Father working above and through all, the unceasing interest of heavenly beings,--all are enlisted in behalf of man's redemption.
​
Oh, let us contemplate the amazing sacrifice that has been made for us! Let us try to appreciate the labor and energy that Heaven is expending to reclaim the lost, and bring them back to the Father's house. Motives stronger, and agencies more powerful, could never be brought into operation; the exceeding rewards for right-doing, the enjoyment of heaven, the society of the angels, the communion and love of God and His Son, the elevation and extension of all our powers throughout eternal ages--are these not mighty incentives and encouragements to urge us to give the heart's loving service to our Creator and Redeemer?

And, on the other hand, the judgments of God pronounced against sin, the inevitable retribution, the degradation of our character, and the final destruction, are presented in God's word to warn us against the service of Satan.

Shall we not regard the mercy of God? What more could He do? Let us place ourselves in right relation to Him who has loved us with amazing love. Let us avail ourselves of the means provided for us that we may be transformed into His likeness, and be restored to fellowship with the ministering angels, to harmony and communion with the Father and the Son. 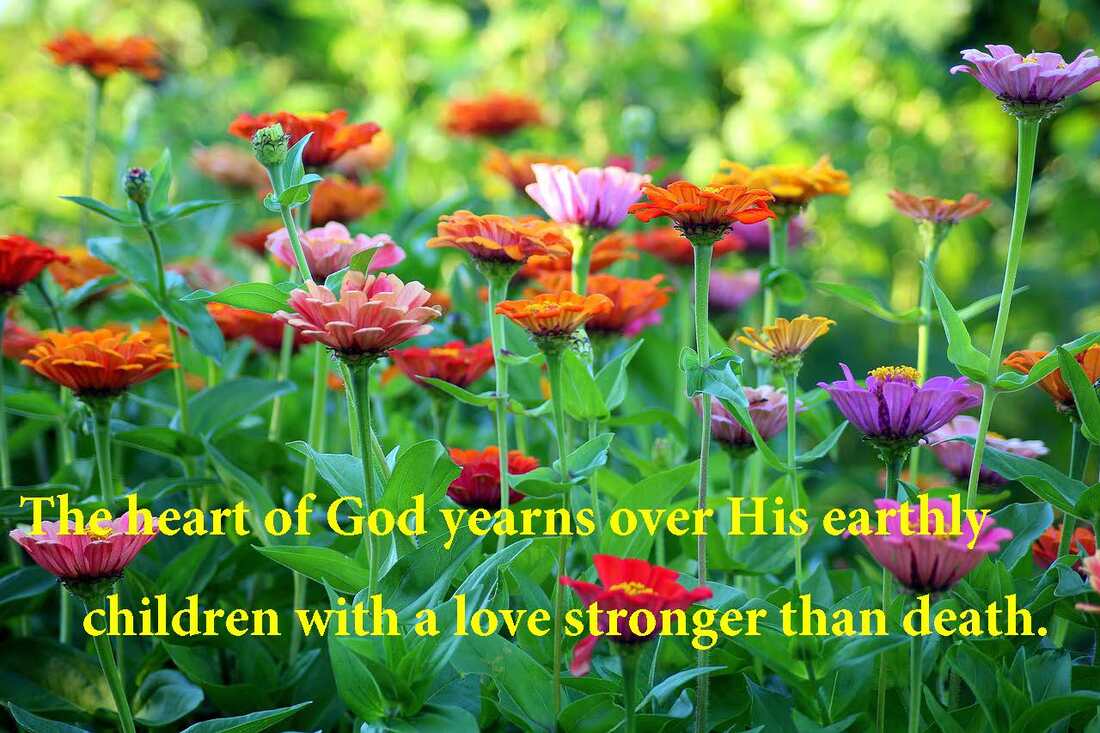