He that covereth his sins shall not prosper: but whoso confesseth and forsaketh them shall have mercy." Proverbs 28:13.

The conditions of obtaining mercy of God are simple and just and reasonable. The Lord does not require us to do some grievous thing in order that we may have the forgiveness of sin. We need not make long and wearisome pilgrimages, or perform painful penances, to commend our souls to the God of heaven or to expiate our transgression; but he that confesseth and forsaketh his sin shall have mercy.

The apostle says, "Confess your faults one to another, and pray one for another, that ye may be healed." James 5:16. Confess your sins to God, who only can forgive them, and your faults to one another. If you have given offense to your friend or neighbor, you are to acknowledge your wrong, and it is his duty freely to forgive you. Then you are to seek the forgiveness of God, because the brother you have wounded is the property of God, and in injuring him you sinned against his Creator and Redeemer. The case is brought before the only true Mediator, our great High Priest, who "was in all points tempted like as we are, yet without sin," and who is "touched with the feeling of our infirmities," and is able to cleanse from every stain of iniquity. Hebrews 4:15.

Those who have not humbled their souls before God in acknowledging their guilt, have not yet fulfilled the first condition of acceptance. If we have not experienced that repentance which is not to be repented of, and have not with true humiliation of soul and brokenness of spirit confessed our sins, abhorring our iniquity, we have never truly sought for the forgiveness of sin; and if we have never sought, we have never found the peace of God. The only reason why we do not have remission of sins that are past is that we are not willing to humble our hearts and comply with the conditions of the word of truth. Explicit instruction is given concerning this matter. Confession of sin, whether public or private, should be heartfelt and freely expressed. It is not to be urged from the sinner. It is not to be made in a flippant and careless way, or forced from those who have no realizing sense of the abhorrent character of sin. The confession that is the outpouring of the inmost soul finds its way to the God of infinite pity. The psalmist says, "The Lord is nigh unto them that are of a broken heart; and saveth such as be of a contrite spirit." Psalm 34:18.

True confession is always of a specific character, and acknowledges particular sins. They may be of such a nature as to be brought before God only; they may be wrongs that should be confessed to individuals who have suffered injury through them; or they may be of a public character, and should then be as publicly confessed. But all confession should be definite and to the point, acknowledging the very sins of which you are guilty.

In the days of Samuel the Israelites wandered from God. They were suffering the consequences of sin; for they had lost their faith in God, lost their discernment of His power and wisdom to rule the nation, lost their confidence in His ability to defend and vindicate His cause. They turned from the great Ruler of the universe and desired to be governed as were the nations around them. Before they found peace they made this definite confession: "We have added unto all our sins this evil, to ask us a king." 1 Samuel 12:19. The very sin of which they were convicted had to be confessed. Their ingratitude oppressed their souls and severed them from God.

Confession will not be acceptable to God without sincere repentance and reformation. There must be decided changes in the life; everything offensive to God must be put away. This will be the result of genuine sorrow for sin. The work that we have to do on our part is plainly set before us: "Wash you, make you clean; put away the evil of your doings from before Mine eyes; cease to do evil; learn to do well; seek judgment, relieve the oppressed, judge the fatherless, plead for the widow." Isaiah 1:16, 17. "If the wicked restore the pledge, give again that he had robbed, walk in the statutes of life, without committing iniquity; he shall surely live, he shall not die." Ezekiel 33:15. Paul says, speaking of the work of repentance: "Ye sorrowed after a godly sort, what carefulness it wrought in you, yea, what clearing of yourselves, yea, what indignation, yea, what fear, yea, what vehement desire, yea, what zeal, yea, what revenge! In all things ye have approved yourselves to be clear in this matter." 2 Corinthians 7:11.

When sin has deadened the moral perceptions, the wrongdoer does not discern the defects of his character nor realize the enormity of the evil he has committed; and unless he yields to the convicting power of the Holy Spirit he remains in partial blindness to his sin. His confessions are not sincere and in earnest. To every acknowledgment of his guilt he adds an apology in excuse of his course, declaring that if it had not been for certain circumstances he would not have done this or that for which he is reproved.

After Adam and Eve had eaten of the forbidden fruit, they were filled with a sense of shame and terror. At first their only thought was how to excuse their sin and escape the dreaded sentence of death. When the Lord inquired concerning their sin, Adam replied, laying the guilt partly upon God and partly upon his companion: "The woman whom Thou gavest to be with me, she gave me of the tree, and I did eat." The woman put the blame upon the serpent, saying, "The serpent beguiled me, and I did eat." Genesis 3: 12, 13. Why did You make the serpent? Why did You suffer him to come into Eden? These were the questions implied in her excuse for her sin, thus charging God with the responsibility of their fall. The spirit of self-justification originated in the father of lies and has been exhibited by all the sons and daughters of Adam. Confessions of this order are not inspired by the divine Spirit and will not be acceptable to God. True repentance will lead a man to bear his guilt himself and acknowledge it without deception or hypocrisy. Like the poor publican, not lifting up so much as his eyes unto heaven, he will cry, "God be merciful to me a sinner," and those who do acknowledge their guilt will be justified, for Jesus will plead His blood in behalf of the repentant soul.

The examples in God's word of genuine repentance and humiliation reveal a spirit of confession in which there is no excuse for sin or attempt at self-justification. Paul did not seek to shield himself; he paints his sin in its darkest hue, not attempting to lessen his guilt. He says, "Many of the saints did I shut up in prison, having received authority from the chief priests; and when they were put to death, I gave my voice against them. And I punished them oft in every synagogue, and compelled them to blaspheme; and being exceedingly mad against them, I persecuted them even unto strange cities." Acts 26: 10, 11. He does not hesitate to declare that "Christ Jesus came into the world to save sinners; of whom I am chief." 1 Timothy 1:15.

The humble and broken heart, subdued by genuine repentance, will appreciate something of the love of God and the cost of Calvary; and as a son confesses to a loving father, so will the truly penitent bring all his sins before God. And it is written, "If we confess our sins, He is faithful and just to forgive us our sins, and to cleanse us from all unrighteousness." 1 John 1:9. 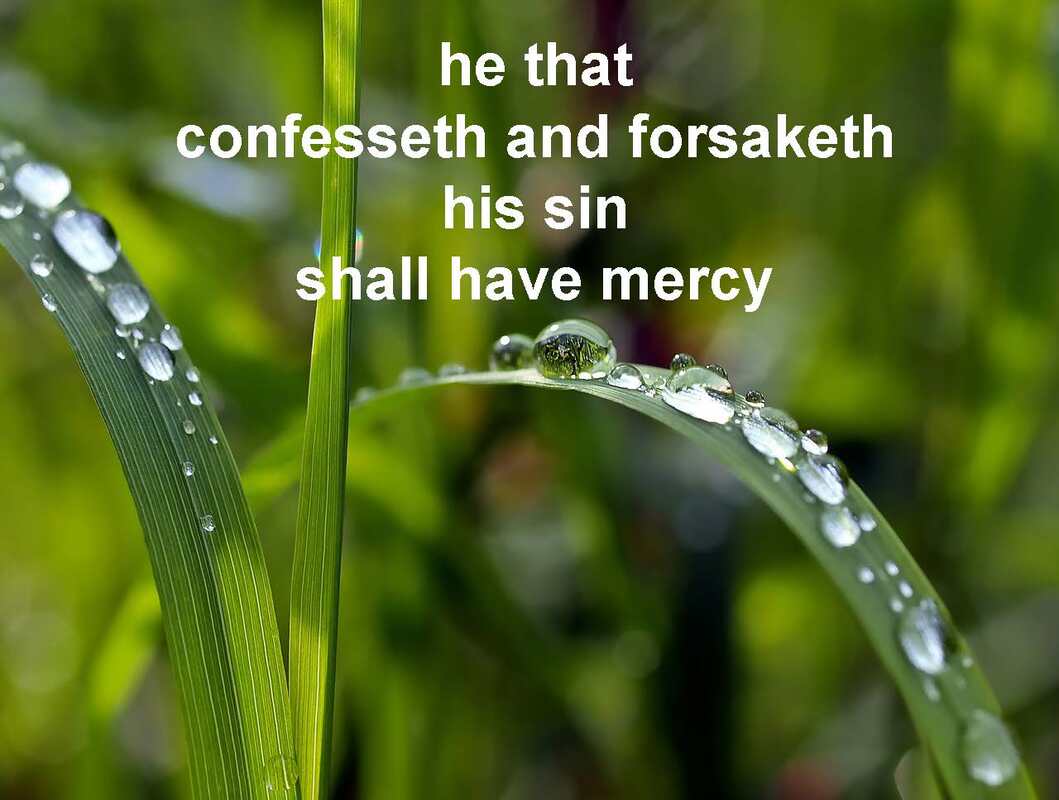